Moved by faith and forgiveness 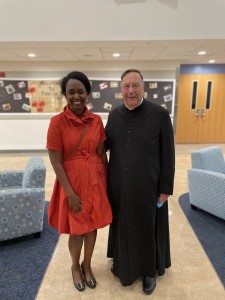 Immaculée Ilibagiza, a survivor of the 1994 Rwandan Genocide and a New York Times best-selling author, inspired an audience of about 100 people with her journey of survival and forgiveness.

Ilibagiza was born and raised in a small village in Rwanda, Africa. The assassination of the Hutu president on April 6, 1994 sparked months of massacres of Tutsi tribe members throughout the country – known today as the Rwandan Genocide.

She and seven other women hid in the local pastor's bathroom for the next 91 days. During the ordeal, Ilibagiza turned to prayer.

With the exception of one of her brothers, her entire family was murdered, along with one million of her fellow Rwandans. When Ilibagiza later met one of the men who killed her family, she forgave him.

"The talk was extremely powerful," said Fr. Gregoire Fluet, college chaplain and director of Campus Ministry. He was touched by the message of forgiveness as empowering, as well as Ilibagiza's "incredible insight...that the people who hurt us often do not fully understand what they are doing, because they are blinded by anger and hatred."

Kaitlyn Corrigan of North Massapequa, N.Y., a sophomore and executive vice president of the Student Government Association (SGA), said "Immaculée was very inspiring to me."

"She opened my eyes to how hardships impact people in different ways," Corrigan explained. "I now have a different outlook on struggles others face as well as myself and will restore that compassion, forgiveness, and faith into my life from now on."