With a beautiful Hudson Valley day as the backdrop, Mount Saint Mary College in Newburgh, N.Y. recognized more than 500 graduates at its 59th annual Commencement Ceremony on Saturday, May 21.

As a bagpipe skirl filled the air, the long procession of graduates headed from Aquinas Hall to the ceremony on the Dominican Center Field, which was packed with their families and friends.

George Abaunza, Vice President for Academic Affairs, served as Master of Ceremonies. The event was presided over by Michael Horodyski, Chair of the Board of Trustees of the college. The invocation was given by Irene Nunnari, Professor Emerita of Arts and Letters.

Master Sgt. MaryKay Messenger, a 1988 alumna of the college, kicked off the ceremony by singing “God Bless America.” Messenger is a native of Newburgh and a well-known soloist throughout the region.

Dr. Jason N. Adsit, president of the college, congratulated the faculty, parents, and graduates on a job well done. Things weren’t easy for the Class of 2022 – Dr. Adsit’s inaugural class – but they were able to persevere through the challenges of the pandemic.

“To use an old adage, the Devil whispered in your ear and said, ‘You’re not going to make it through the storm,’” said Dr. Adsit. “And you rose up and you yelled back with balled fists, ‘I am the storm!’” 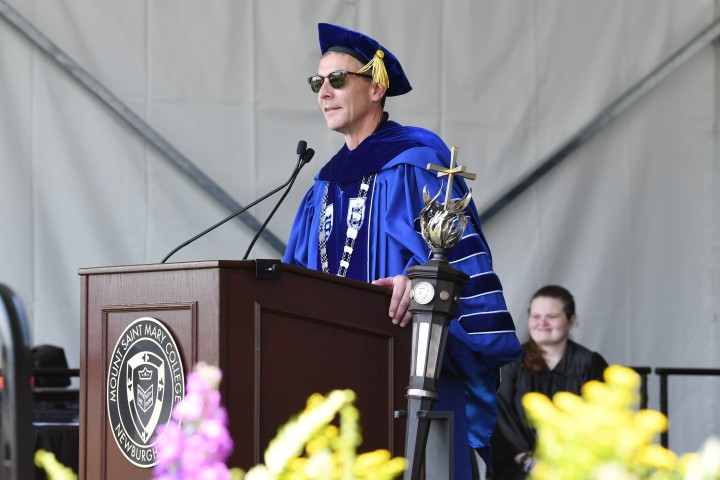 Dr. Adsit told the graduates that the philosopher Matshona Dhliwayo once said that beautiful souls are shaped by ugly experiences. By that measurement, he said, “My friends, you have some unbelievably beautiful souls and you will continue to carry that forward into the world.”

The graduating students then heard from honorary degree recipient and Commencement speaker Karina Cabrera Bell ’01, a Fortune 500 executive and former official in the Obama White House.

In addition to her client work, Cabrera Bell has a passion for coaching and mentoring. She serves as a member of the leadership team within Accenture’s National Hispanic Employee Resource Group (ERG).

Before moving to the private sector, Cabrera Bell served in many levels of government in her 15-year career in public service. At the Obama White House, she was director of Congressional Affairs, forging partnerships with Congress and national advocacy groups to recruit top talent. Prior to this, she worked as a senior advisor to U.S. Senator for New York Kirsten Gillibrand, where she led legislative initiatives for women and families.

Cabrera Bell proudly serves on the national board of Girls Leadership and has been featured in media outlets including Forbes and The New York Times. She is also a frequent speaker on topics of inclusive leadership, equitable practices, and women’s leadership. An inspirational activist and speaker, she has received numerous awards and recognitions for her community work, including the New York State Assembly Leadership Award and the Woman of Distinction Award from El Diario La Prensa, New York’s largest Spanish-language newspaper. 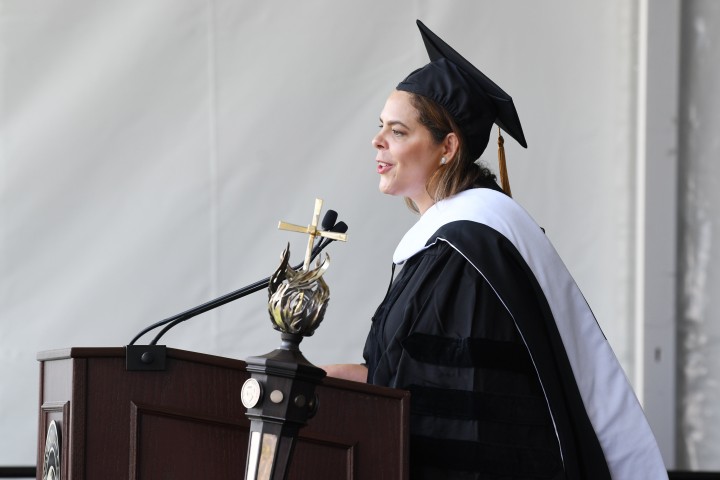 Cabrera Bell praised the graduates for their ability to overcome unforeseen obstacles while remaining upbeat and focused on their studies: “This generation of Knights has gone through something that no other classes have before,” she said. “Yet, through it all, you have shown incredible resilience and strength.”

Reflecting on her own time at the college, Cabrera Bell said, “The Mount changed so much for me. It’s where I started an entirely new path for my life. It’s where Professor Irene Nunnari told me I had a voice…It’s where I learned that if I wanted to change things, I had to be vulnerable and put myself in the arena.”

Having been in the Mount graduate’s shoes before, Cabrera Bell discussed the three lessons she wished she had known when she graduated from the college:

Finally, she encouraged the students to take what they have learned at Mount Saint Mary College and use it to make the world a better place.

“We live in a hard time with lots of problems,” Cabrera Bell said. “I know there is a temptation to tune it out. But I ask you to do the opposite, to engage, to rise up and leave the world better than you found it. Be the spark, in your circle, in your job, and in your community. If you see someone getting bullied or mistreated, be the spark that stands up for them. If you see a cause that needs a voice, be the spark that speaks up for it.”

Julia Lavin of Ledyard, Conn., Senior Class president, congratulated the Class of 2022 for not only enduring the hardships of COVID-19, but for also thriving throughout the pandemic.

“Even though we have not had the most conventional college experience, thanks to our wonderful professors and administrators who care so deeply about their students, there is not a doubt in my mind that we are prepared to handle anything that gets thrown at us along the way,” she said. “We are all leaving more resilient and capable people than when we arrived here.”

In his speech to his fellow graduates, Cullen Roper of Newburgh, N.Y., vice president of the Student Athletic Advisory Committee, reminded students of the need for unity.

“We are all living proof that alone we can accomplish many things, but with the help of others, we can accomplish anything,” he said. “To be a college graduate is one success in its own, but to become a welcoming and caring human being will propel us into the next chapter of our lives. I am proud to be here in front of you all today and proud to be a Mount Saint Mary College graduate.” 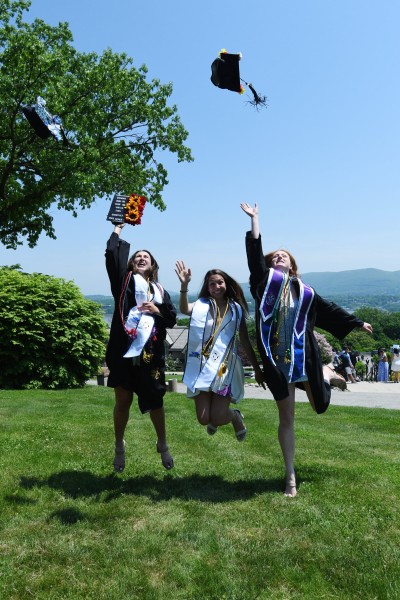 Two awards were given to Mount Saint Mary College faculty during the ceremony. Joshua Laskowski of Islip Terrace, N.Y., president of the Mount’s Student Government Association (SGA), presented the SGA’s Excellence in Teaching Award to Jennifer Bready, professor of Mathematics. The award recognizes a full-time professor that the students believe goes above and beyond in their role as a professor and in their commitment to student success.

In addition, Anne Ferrari, associate professor of Psychology and Chair of the Faculty Affairs Committee, presented the Mount Saint Mary College Faculty Award to Fr. Gregoire Fluet, college chaplain and director of Campus Ministry. Ferrari praised Fr. Fluet’s dedication, integrity, and service to the college, as well as his unwavering support for everyone in the Mount community – especially students.