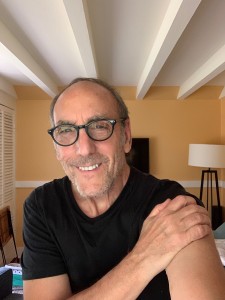 Goldberg is a professor of Digital Media and Film Studies, as well as the director of the Communication, Art, and Digital Media program at the Mount.

The vignette finds a young college student returning home after a year of college in the late '60s, but his homecoming isn't quite what his parents had in mind. It can be read at albanypoets.com/2021/10/salvatore-benedetto-by-dean-goldberg/

The story is part of Goldberg's novel in progress, A Radical Departure. It revolves around the adventures of two teenagers during the summer and fall of 1969.

This is the third fiction piece Goldberg has had published in Albany Poets. Earlier this year, Goldberg's "Old Bill Lee" became the first fiction story the outlet ever published. He followed it up with the short fiction piece "Bubs," featuring a GI returning to civilian life after World War II.

Albany Poets promotes the arts of upstate New York. In addition to publishing poems and now short fiction, Albany Poets also hosts open mic nights, poetry readings, and more to help give artists a platform to share their art with the world.

In addition to his skill as a writer, Goldberg has extensive background in film and production. He joined the Mount in 2008 and established Mount Media, a creative agency formed with Mount students.

Goldberg directs the Communication, Art, and Digital Media program at the Mount. The program encompasses the study of journalism, video production, advertising, public relations, art, design, and film studies at the college. Housed in the Mount's Division of Arts and Letters, the program prepares students for both traditional and emerging professions.

He is also the co-director of Mount Saint Mary College's CMA Gallery, which exhibits professional art and media picked by Mount faculty from among the rising population of artists who live and work in Newburgh, Beacon, and throughout the Hudson Valley.