Just days after graduating, Garzone, Park, and their five children were doing some last-minute Christmas shopping at a local chain store. But what started as a mundane family outing soon became anything but.

A few minutes into their trip, "I heard a sound: it was loud, very loud," Garzone explained. Another shopper had suddenly collapsed to the floor and "everyone was just standing there, looking at him. Nobody knew what to do."

No one, that is, except for Garzone.

Garzone sent his stepdaughter to locate Park and told an employee of the store to call 911. The man had fallen flat on his back and was unconscious. Garzone feared that the man had suffered head trauma and he immediately checked for a pulse.

Garzone initiated CPR, and Park quickly arrived to help. By chance, another trained nurse was in the store at the same time and started taking turns with Garzone and Park doing chest compressions.

Critical moments passed by, but attempts to revive the man weren't working. The other nurse on the scene said that she was sure the man had died. Maybe he had, but Garzone and Park refused to give up.

"This guy was there by himself, and if he did die there that day and no one helped him, his family would have no idea what happened to him," Garzone said. "It's about human life. That's someone's dad or son."

Finally, the man's pulse returned, if only faintly. By that point, the paramedics had arrived and they took over.

The couple's children had witnessed the entire event unfold. Although it was a scary moment for them – and rightfully so – it also helped them to understand and appreciate their parents' decision to return to college.

"All the sacrifices of us not being home, of us studying -- all of it added up to our children seeing us, in that moment, possibly save a life," Garzone explained. "And that's one of the things that meant so much about this."

If it had been a movie, Garzone and Park would have gotten a phone call a few days later with an update on the man's condition. But reality is bittersweet: the family never found out what happened to the man they aided that day. It's something Garzone is used to. After earning an associate degree in pre-nursing studies, he worked as a certified Emergency Medical Technician (EMT), an occupation that rarely offers any kind of closure regarding the patients they serve.

"I always wonder if he survived, because he had a pulse when he left," said Garzone.

He added, "I'm a very religious person. I was God's tool and He guided me that day. Having faith keeps me connect to the people I treat."

Garzone is the first member of his family to earn a baccalaureate degree. A serious and highly motivated student, he was named to the Deans' List several times and inducted into the Mount's chapter of Sigma Theta Tau, the International Honor Society of Nursing, in the Fall 2020.

"Mount Saint Mary College gave me that extra confidence to believe in myself," Garzone said. "They pushed me to the point where I'm a different person now; they pushed me to practice skills, even the ones I had already known. The Mount brought be back to the basics, to make sure I was confident in any situation. And when that man collapsed, I was ready."

The college also fostered his sense of community. Put simply, "We're all in this together," he said.

Garzone and Park found more than just a good education at the Mount: they also found each other. 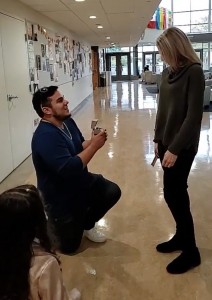 They met when they were assigned as lab partners in Microbiology lab, and about halfway through their academic journey, Garzone proposed to Park in the doorway of the lab where they first met. The couple both had children from previous relationships – Garzone had one daughter, and Park had three – and together, they had one son, named Anthony.

After graduation, Garzone plans to pursue a career in trauma and critical care nursing. He would ultimately love to become a flight (transport) nurse, where he could use his training in a myriad of clinical situations.