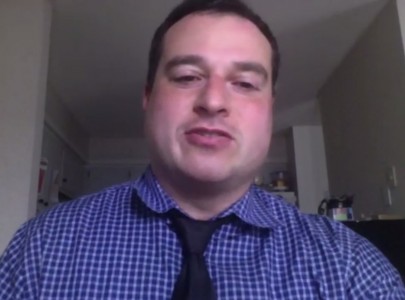 Mount Saint Mary College's Student Council for Exceptional Children (SCEC) recently invited author, speaker, and autism activist Jesse Saperstein to discuss his experiences as a young man with Asperger's syndrome in school, with his peers, and the workplace.

Autism Awareness Day was Friday, April 2 and the talk coincided with it.

Saperstein was diagnosed with Asperger's, a form of autism, at the age of 14. Along the road to adulthood, he has learned many lessons the hard way.

He noted that individuals with Asperger's can have a lack of social skills and resistance to change in routine. These challenges caused Saperstein many issues throughout his life, he said.

"I have lived two extremely different lives as somebody on the autism spectrum," explained Saperstein. "Most of my life was spent in distress: being isolated from my peers, having horrific transitional periods. Then, at the age of 34, life finally started to get significantly better and it's stayed that way ever since...It's not perfect, but it's certainly a lot closer than the bulk of my 39 years."

After graduating from Hobart and William Smith Colleges in 2004 with a BA degree in English, Saperstein set out to conquer the 2,174-mile Appalachian Trail to benefit the Joey DiPaolo AIDS Foundation, raising more than $19,000. But shortly after his hike ended, Saperstein was exposed to some of the harsh realities of living as an adult on the autism spectrum.

"I lost two careers in a very short period of time," he explained. "A lot of...adults would have brushed it off as a learning experience and moved on. But for me, it was the end of the whole world times 10."

His decision to become a writer was an opportunity to create his own career and advocate for his peers who are not always granted a voice. Saperstein's Atypical: Life with Asperger's in 20 1/3 Chapters, was published in April 2010. His most recent book is Getting a Life with Asperger's: Lessons Learned on the Bumpy Road to Adulthood.

"Some things have changed for me as someone on the autism spectrum, and other things have remained exactly as they are," said Saperstein. "I cannot...teach any of you or your students to let go. That's not become much easier. What has become significantly easier is understanding that someone is an adult first, and somebody with a disability second."

Teachers should remember that "for your students [on the autism spectrum], certain things which are not a big deal for the average person are a catastrophe in their lives, where they are almost inconsolable," Saperstein said. "The best we can do for their students is to help them understand that not everything is going to work out as planned. But some things will. If they follow your teachings, they are much more likely to get the break they deserve."

His current goal is to help create a graduate school program that will assign students to live with families affected by the autism spectrum. This would provide them with valuable fieldwork for a career in special education and increase the support for overwhelmed families, said Saperstein.