Hundreds of successful grads, spanning decades of Mount Saint Mary College history, journeyed back to their alma mater from November 5 to 7 for the college's annual Alumni Weekend.

Alumni and their families celebrated their accomplishments, caught up with old friends and professors, and saw what's new at the college that launched their careers. They enjoyed a barbecue with their classmates and professors; class dinners and other reunions; and more.

During the festivities, James Finn Cotter, the longest-serving professor the Mount has ever known, was honored by the Alumni Association for 57 years of dedicated and outstanding service to the college. Cotter retired in August of 2020, and during his time at the Mount, he taught in or chaired the Divisions of Humanities, Arts and Letters, and Religious Studies and Philosophy; he was a mentor to countless peers and pupils; and he hosted many popular poetry events on campus, among many other contributions. His legacy is truly part of the DNA of the college, from his administrative service to the thousands of students on which he imparted a love of literature.

Christina Bart Bilsky, a 1985 Nursing graduate of the Mount, was presented with the James V. McEnery Alumni Service Award for her continued service to her alma mater. As a registered nurse at the Memorial Sloan Kettering Cancer Center in New York City – a job she began right out of college – Blisky spent 35 years bringing compassion and kindness to her patients. She noted that her Mount education helped her to become the success she is today: "I utilized the philosophy from the School of Nursing to see the spirituality of each patient, not only taking care of them physically, but also their spiritual souls."

Bilsky gives back to her alma mater by being a member of the Mount's School of Nursing Alumni Advisory Council. Before the pandemic, she hosted a networking event for recent Mount Nursing alumni. She connected with many of these new nurses and assisted them with earning jobs in the New York City area.

Spanish-speaking journalist Enny D. Pichardo '06 was honored with the college's Distinguished Alumni Award, recognizing his contributions to society through professional and volunteer work. He is currently the host of #EnNYConMas, a self-produced YouTube show that provides daily news briefs regarding issues affecting the Latino community in New York City. In his personal life, Pichardo uses his vast broadcast experience to inspire the next generation of journalists. He has headlined many career day events at local schools and participated in panel and solo talks at high schools and colleges – including the Mount. 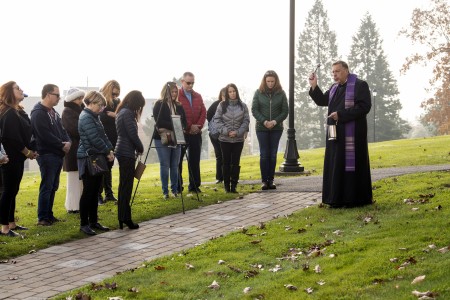 Following in the footsteps of St. Dominic, the Dominican Sisters of Newburgh established Mount Saint Mary College as a four-year institution in October of 1959. The Mount continues its rich tradition of academic excellence and dedication to community, about 20,000 graduates later.

The Mount is ranked a Top-Tier Regional University by U.S. News & World Report, and offers bachelor's and master's degree programs for careers in Nursing, Business, Education, and more.