The game marked the Mount's 11th straight victory and pushed it to 23-3 heading into the 2022 NCAA Division III Tournament. 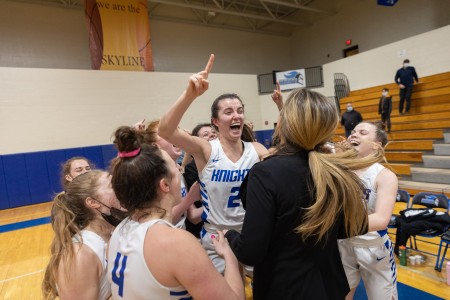 A tightly contested opening period featured four lead changes before baskets by the Knights' Annie Keenan of Nesconset, N.Y. and Lauren Desrats of Warwick, N.Y. opened a 12-9 advantage in the first quarter. With the Knights in front 14-10, their largest lead of the period, USMMA responded with the final four points of the quarter, to knot the score at 14-14.

The Knights closed the second period by building their lead back to 34-29. With a shot percent of about 34 percent in the first half, the Knights struggled from three-point range after going just 2-for-16 from behind the arc.

In the second half, neither team would get on the board until Keenan knocked down a pair of free-throws in the third quarter to give the Knights a 36-29 advantage. USMMA responded with the next six points to cut the Mount's advantage down to a single point, at 36-35. But Bojka pushed the Mount back in front by three with a jumper before Asia Rivera of Saddle Brook, N.Y. buried a three-pointer.

In the fourth quarter, the Knights put together a 15-2 run covering nearly six minutes to open their largest lead of the game at 58-43. Though USMMA climbed back to within seven points of the Mount, the Knights ultimately ended the game with a 61-53 victory.

The Knights will open the NCAA Tournament on Friday, March 4 at 7:30 p.m. when it takes on Johns Hopkins in Baltimore, Md. To watch, follow these links: