Alexander Howard of Newburgh, N.Y. and Kyle Robbins of Wallingford, Conn., Mount Saint Mary College Business majors who are graduating this May, won't have to wait long to launch their careers: both have already accepted jobs in their field. 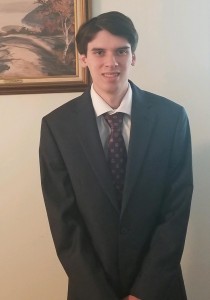 Howard, a Management and Administration major, recently accepted a job as a paralegal for Drake Loeb PLLC in New Windsor, N.Y. He will begin his new position on Monday, May 24, just two days after his Commencement ceremony.

"I look forward to having a more in-depth understanding of how different legal matters are handled," said Howard. "I also look forward to combining my education in Business and Legal Studies in a job that is suited for someone with proficiencies in both."

He added, "It's a big relief to already have a job lined up before I graduate."

Howard credits the Mount with helping him to secure his new position. The Mount Saint Mary College Business Advisory Council, of which Howard is a student member, brings together Mount professionals and local business leaders to examine cutting-edge business practices and discuss how to keep the college's courses connected to real-world business needs. It was at one of these council meetings that Howard met Jennifer Schneider, managing attorney at Drake Loeb, who was impressed with Howard's knowledge and demeanor.

Afterwards, the Mount's Career Center gave Howard tips on how to improve his résumé and helped him to reach out to Schneider.

"I would...like to thank Ellen [Bourhis Nolan, director of the Mount's Career Center] and the rest of the staff in the Career Center," said Howard. "Without their help, I would not have this job opportunity." He added that last year the Career Center's Robin Rosenberg assisted him with obtaining an internship with another law firm. It gave him hands-on experience he can transfer to his new job at Drake Loeb PLLC.

The path to graduation was a fulfilling one, Howard explained. It was Michael L. Fox, assistant professor of Business Law, Pre-Law advisor, and MBA coordinator at the Mount, who inspired Howard to switch to the Business major in his sophomore year, encouraged him to join the college's Pre-Law Society (which he was president of this year), and invited him to be a student member of the Business Advisory Council.

"Combining business and law with a lot of different courses allowed me to have an understanding of both fields and set me up to be able to handle a job like this one," Howard said.

Howard stands on the precipice of a new journey, but as he prepares for the future, he is also reflecting on his college career at the Mount.

"I'll miss being on campus," he revealed. "Mount Saint Mary College has one of the most beautiful sceneries overlooking the Hudson River. Growing up in the area, I have always loved that aspect of the Hudson Valley, especially during the fall. I will also miss interacting with fellow students and professors on a daily basis." 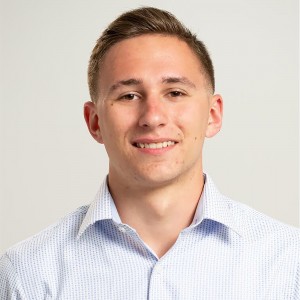 Like Howard, Business Marketing major Kyle Robbins can rest a little easier as he awaits the college's upcoming Commencement ceremony. Come July, Robbins will be working in sales at Otis Elevator Company. He's excited about the opportunity, which will see him moving to Charlotte, N.C.

"I'm looking forward to working for a company that is an industry leader, starting my professional career, and making connections with my new co-workers," Robbins explained.

He added that getting the position has given him a "huge sense of relief and accomplishment, especially during the pandemic because many places aren't hiring like they once were. But I worked extremely hard to be in the position I am currently in and am excited about the near future."

Part of that hard work included doing three internships – earned with help from the college's Career Center – as well as joining the Mount's Student Business Association, completing the Mount's prestigious Medici Scholar Program where he worked with a non-profit organization, and always doing his best in all of his Mount courses.

"The Mount's School of Business [provided] me with a close connection to the professors who have pushed me to be the best student I could be," said Robbins. "The program also helped me gain confidence when giving presentations, writing business reports, and growing my work ethic."

He added, "I would like to personally thank Professor Anthony Scardillo [assistant professor of Marketing]. He was not only my professor, but he was also my advisor and mentor. He pushed me to always better myself and work harder, which shaped me into the person I am today. I knew if I ever had difficultly or a problem, he would be there to help any time of the day, and I'm forever grateful for everything he's done."