Now, Mulhall is celebrating her successful thesis defense. She recently earned a Ph.D. in Microbiology and Immunology from the New York Medical College in Valhalla, N.Y.

As a Ph.D. candidate, Mulhall's research has focused on periodontal disease. Commonly known as gum disease, periodontal disease is an infection that can be caused by poor habits in dental hygiene, allowing plaque to build up and harden on teeth. 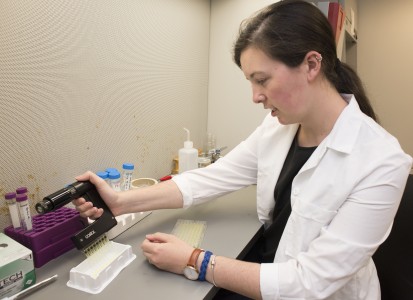 Mulhall has been working in the lab of Dr. Salomon Amar, DDS, Ph.D., Vice President for Research at New York Medical College. Amar and Mulhall are studying the use of probiotics to prevent and alleviate the symptoms of periodontal disease, such as inflammation of the gums and tooth loss.

Just like in other areas of the body, there's a tiny ecosystem, or microbiome, in everyone's mouth, Mulhall explained. An increase of bad bacteria – known as "red complex" – can lead to periodontal disease.

"We wanted to look at how we can manipulate the microbiome to bring it back to a healthy state," she explained.

The disease's prevalence makes it an appealing target: "Periodontal disease is the most common disease across the United States," explained Mulhall. According to the Centers for Disease Control and Prevention (CDC), half of Americans aged 30 or older have periodontitis, the more advanced form of periodontal disease.

So far, Mulhall, Amar, and their fellow researchers have published several research papers on periodontal disease in prestigious academic publications such as Infection and Immunity and Microorganisms.

Mullhall's dedication and extensive knowledge of her craft come as no surprise to her former professors at Mount Saint Mary College.

Building a strong foundation
Two aspects of New York Medical College that appealed to Mulhall are the small class sizes and the one-on-one attention the professors give students – something she enjoyed from her time at the Mount as well.

"I came from a large high school with almost 3,000 kids and I remember these huge class sizes," said Mulhall. "But when I went to the Mount, there were much smaller class sizes. I got a lot more one-on-one interaction and I really liked that. Very close-knit and collaborative and everybody is rooting for you – you're not just a number at the Mount."

A student of the Mount's rigorous honors program, Mulhall was also active on campus as vice president of the local chapter of Beta Beta Beta, a national honor society for biology.

She credits the Mount's Natural Sciences department with setting her on the path to a Ph.D. At the Mount, she learned to read and critique scientific literature, the proper way to implement the scientific method, and more. 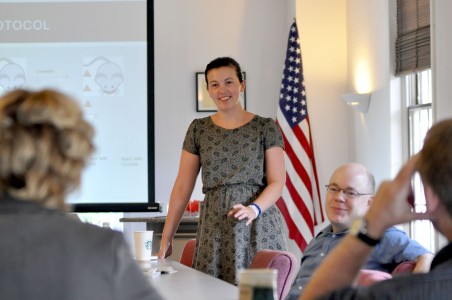 Then there was the influence of James Moran, associate professor of Biology and former director of the college's Summer Undergraduate Research Experience (SURE). For several summers, Moran was Mulhall's research mentor in the SURE program, where students work closely with professors, aiding them in hands-on research and making meaningful contributions to their respective fields.

Without a concrete idea of what she wanted to do after college, it was Moran's suggestion that she continue her research into grad school that helped Mulhall to choose the career path she is on today.

And it all started during the Mount's SURE program: "I had the opportunity to do clinically relevant research through the OxyVita project," she explained.

Artificial blood, real results
OxyVita is a trailblazing blood substitute that can be manufactured as a liquid and is the first working blood substitute in powder form in the world as well. Since it does not require refrigeration, it could be used in hospitals, combat situations, and more.

Through SURE, Mulhall tested the immune response of Balb-C mice after multiple exposures of OxyVita. She introduced OxyVita into albino lab mice and monitored them for the production of antibodies. A control group was injected with saline.

Every three weeks, she repeated the process and took readings. She noted an immune response from three out of four test subjects, but the mice showed no evidence of serious side effects occasionally associated with blood substitutes.

In 2013, Mulhall presented her findings to the OxyVita Inc.'s pharmaceutical and biotechnology professionals, including president and CEO Hanna Wollocko.

Even after Mulhall graduated from the Mount, students in the college's SURE program have carried on Mulhall and Moran's OxyVita research in different capacities to this day.

"I really liked research. I liked understanding the mechanisms of how things happen," Mulhall explained. "I think without getting to do research at the Mount, and having the professors push me, I wouldn't be where I am now. It was really helpful."

The scientific method served her well in her SURE research, even when things didn't go exactly according to plan, Mulhall noted.

"You think that when you're planning out an experiment, you're going to get the results, and they're going to make sense," she said. "That doesn't always happen. You learn to critically think and overcome these challenges and wonder 'How can I use this to shape my next experiment?' [SURE] was a masterclass in critical thinking."

A bright future
With a decade of higher education under her belt, Mulhall hopes to find work in the pharmaceutical industry.

"The whole reason I got into this is that I want to make some kind of positive impact," she explained. "I want to use my education to improve peoples' health and well-being."

Helping humanity is something Mulhall has wanted to do since she was a child. Those embers of service were stoked at the Mount, where, in the tradition of the founding Dominican Sisters, hands-on service is built into many classes and student clubs.

In the future, she hopes to work on medical research that could positively impact patients' lives.