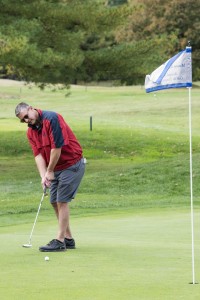 Sergeant Major MaryKay Messenger ’88, a Newburgh native, is a well-known soloist throughout the Hudson Valley region and beyond. She is the premier vocalist for the United States Military Academy Band in West Point and first sang with them at the age of 12. She continued as a guest vocalist with the band until she joined the Army in 1996.

Despite the pandemic, two tournament date changes, and economic uncertainty, nearly 150 friends of the college came to support the Mount at the event. Barton Chevrolet, Barton Cadillac, and iHeart Media of the Hudson Valley were Platinum Sponsors of the tournament.

“We want to thank all of our amazing supporters who went above and beyond by participating and donating to support student scholarships at a time when the college greatly needed their assistance,” said Kathleen Barton, Director of Advancement Events at the Mount.