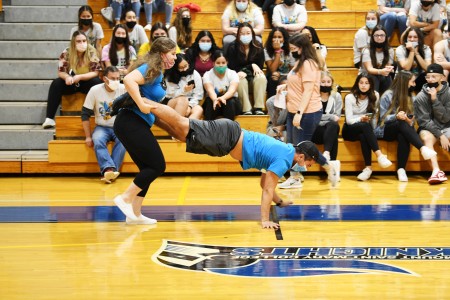 As part of the college's annual Spirit of the Mount Week, students compete against each other to claim the Mount Olympics trophy.

Mount students had participated in various activities leading up to the Mount Olympics, many earning them class points throughout the week.

The Battle of the Class Sandwich went down on Tuesday, October 19. Each class sold their own sandwich concept, and the one with the most sales won points toward the Mount Olympics. From one sandwich with ground beef slathered in cheese, ketchup, and mayo to another piled with turkey, ham, bacon, and mozzarella sticks – let's just say there were no vegetarian options in sight.

Mount trivia was held on Wednesday, October 20th, where students flexed their Mount knowledge to win more points, among other events throughout the week.

After the competition was over, Spirit of the Mount week ended on Saturday, October 23 with the Mount's Annual Bonfire, where students from all classes come together to celebrate the spark they collectively bring to the college.