Mount senior supports family, community on the way to becoming a nurse

Alyssa DiMare of Staten Island, N.Y., a Mount Saint Mary College senior, has spent her time at the Mount inspiring others while simultaneously sparking her own success.

With Commencement on the way, DiMare notes that she has worn many hats throughout her four years at the Mount: dedicated Nursing major, member of the women's lacrosse team, orientation leader turned admissions ambassador, Fuzzy Friends Clinic volunteer, and mentor to fellow Nursing students – just to name a few.

"When I was looking at colleges my junior year of high school, I remember every tour guide telling me to get involved as much as you can, so that's what I tried to do," DiMare explained.

After spending a couple of days in the hospital with appendicitis the summer before her junior year of high school, DiMare began to dream of becoming a nurse.

"Seeing the compassion [the nurses] had for me, and how they advocated on my behalf to the rest of my medical team – I knew that was something I wanted to do," she said.

DiMare's biggest takeaway from the Mount Nursing Program is the confidence it has given her in herself and her skills. After graduation, she hopes to work as a nurse in a hospital in New York City. DiMare is interested in a medical-surgical floor position, but her main goal is to work in an Emergency Department.

Working in an ER is already familiar to DiMare – that is, when it comes to the needs of unwell stuffed animals. At the Fuzzy Friends Clinic, DiMare helped set up an emergency room environment at Bishop Dunn Memorial School, the private K-8 school located on the Mount's campus. Elementary students brought in their under-the-weather fuzzy companions, and Mount nursing students worked with the children to treat the patients.

"I was able to help some kids ease their fear of the doctor and even become interested in some medical techniques," DiMare said. "This experience really showed me how much of an impact you can have on children and how you can be a leader in the community." 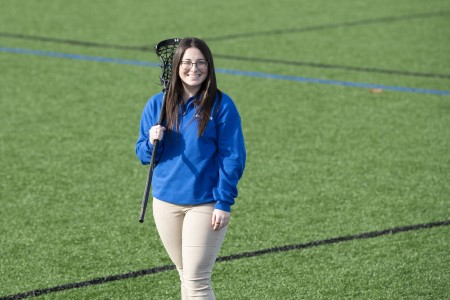 Getting involved has been a staple in DiMare's four years at the Mount. When she was first on the college hunt, she remembers many other schools having policies that Nursing majors could not also be on athletic teams. But at the Mount, her growth was not limited – it was encouraged. DiMare not only joined the women's lacrosse team, but also took on a position as an orientation leader in the summers before her sophomore and junior year, which later led her to become an admissions ambassador as well.

"I feel like I have really found my voice in college, and I owe a lot of that to my lacrosse coach. He has always reminded me to be confident in myself, something I struggled with and still do from time to time," DiMare explained. She was able to cultivate growth not only as a student but also an athlete and mentor; the latter two being positions she equates to having the strongest impact on her overall development at the Mount.

DiMare is one of many Mount students who has met the COVID-19 pandemic with resilience and adaptability.

"We have all had to completely change our learning habits," she noted. "Nursing in general is a very hands-on major, so not having as much hands-on has been a little difficult."

That wasn't the only skill she honed from her experience of being a student throughout the pandemic: "The Nursing department did a great job of supplementing hands-on activities with case studies...as the semesters have gone on, I realized how much my critical thinking has expanded because of them," she said.

The culmination of these experiences and skills has made DiMare a mentor to fellow Nursing students – one in particular being her brother, Christopher DiMare, a sophomore in the Mount's nursing program. 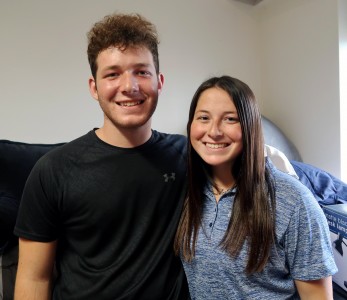 "I think having Chris as a fellow nursing major has been great," DiMare noted. "I really try to be a mentor to him and his friends about certain classes and just share some strategies with them on how to succeed in each class. I always explain to prospective students that the Mount is like one big extended family because of its size, which is something I loved about the school. So, having my actual family here was just a perfect addition to that."

Alyssa and Chris DiMare are far from the first siblings to study in the Mount's Nursing program together. Aleena Alexander of Wappingers Falls, N.Y., another Nursing student graduating this spring, will be passing the torch to her brother Anvin Alexander, who is currently a junior in the accelerated Nursing program.

The DiMares and the Alexanders are just the most recent of a long history of siblings who have taken on the Mount's Nursing program together. Twin sisters and Mount Nursing alumnae Elizabeth Scannell-Desch '72, PhD, RN, OCNS, FAAN and Mary Ellen Doherty '72, PhD, RN, CNM are another prominent example. The sisters used their Mount foundation in nursing to propel them to success, including coauthoring two books – Nurses in War: Voices from Iraq and Afghanistan (2012) and Nurses After War: The Reintegration Experience of Nurses Returning from Iraq and Afghanistan (2016).

The Mount community cannot wait to see the accomplishments Alyssa DiMare, her brother, and all of the college's other skilled Nursing majors go on to achieve.