November 2020 – Join Mount Saint Mary College online for its 11th Annual Gala on Wednesday, December 9 at 7 p.m., celebrating the students, employees, and alumni who have worked to keep their communities safe and healthy during the COVID-19 pandemic.

The keynote remarks will be given by Rachel and Andy Berliner, founders of Amy’s Kitchen. The company recently broke ground on a new production facility and kitchen in Goshen, N.Y., and has been a well-respected maker of organic foods for more than three decades.

Tickets to the virtual Gala premier are $100. To purchase tickets, visit msmc.edu/Gala or contact Kathleen Barton, Director of Advancement Events, at kathleen.barton@msmc.edu

Funds raised will enable the college to provide an affordable, values-based education to thousands of deserving students, many of whom are among the first in their families to attend college. 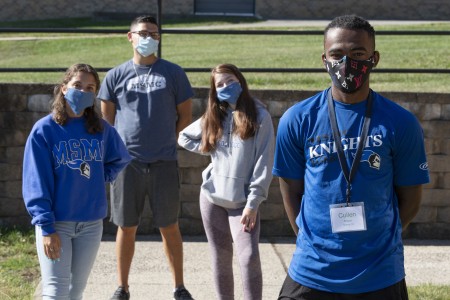 It was a long journey from the first days of online instruction to living, working, and learning on campus again. But it was also through these hardships that the Mount Saint Mary College community grew, adapted, and became stronger.

The college is proud of its community members who went above and beyond during this time, including Assistant Nursing Professor Elaine Suderio-Tirone, who sewed and donated thousands of cloth masks to those in need. Learn more about the Mount family’s service at the gala.

Amy’s Kitchen founders Rachel and Andy Berliner will be the featured keynote speakers. They will discuss their path to success over the course of more than 30 years in business.

In 1987, while Rachel was pregnant with their child Amy, Andy went looking for ready-made meals at their local natural grocery store. When he couldn’t find anything organic and vegetarian that satisfied their taste buds, they decided to make their own.

Amy’s Kitchen began right out of their home: the Berliners initially made meals by hand and sold them locally. They thought they would remain a small company, but not long after Amy’s appeared in stores, consumers began asking for products like pizzas and soups, as well as gluten free and dairy free options.

More than three decades later, Amy’s Kitchen has grown beyond the Berliner’s wildest dreams, going from family members pitching in anywhere they could, to a wonderful group of employees, farmers, and suppliers. In addition,Amy and her husband, Jace, play active roles in the company that shares Amy’s name.