Dozens of undergraduate students gathered in the Aquinas Hall Atrium at Mount Saint Mary College on Wednesday, September 22 to showcase the results of their diligent research.

The symposium was the culmination of the Mount's Summer Undergraduate Research Experience (SURE), during which students work closely with professors, aiding them in hands-on research and often making meaningful contributions to their respective fields. This year's SURE effort was coordinated by James Moran, associate Biology professor at the Mount.

As it has been in previous years, science was a popular field to explore. Aaliyah Austin of Middletown, N.Y. and Christopher Christiano of Waterbury, Conn., along with their faculty mentor, Suparna Bhalla, associate professor of Biology, worked on the project "Understanding Phage Diversity: Annotation of Novel Bacteriophage Inventa." The rise of antibiotic resistant bacterial strains is quickly becoming a major issue, noted Austin. Tackling this problem has scientists looking back at a decades-old discovery: bacteriophages – viruses that target and destroy bacteria – were shown to be effective against bacterial infections. To that end, Austin and Christiano focused their efforts on studying the novel bacteriophage known as Inventa.

From Education to Arts and Letters, students from many other disciplines were busy in this year's SURE as well,. For example, Louise Goodman of Brewster, N.Y. presented "Misusing Veterinary Recipes: Cats in Early Modern England," which she worked on under the mentorship of Rob Wakeman, assistant professor of English. While bringing one's pet to the veterinarian is common today, in Early Modern England (1500-1800), veterinary literature was primarily aimed towards livestock. Goodman notes that these animals were not seen as pets or companions, but instead, they functioned as financial assets to their owners.

"My research focuses on the instances where evidence of veterinary care for pets is present in recipe books, diaries, and other early modern household texts," Goodman said. "By doing so, I hope to establish a portion of the culturally and temporally influenced mindset that has developed into modern-day veterinary care."

Other SURE projects included "EscarGLOW: Effects of Extracted Cepaea Hortensis Mucus on Malassezia Yeast Growth" by Ashley Harley of Newburgh, N.Y. with mentors Moran and Evan Merkhofer, associate professor of Biology; "Decodable Texts for Engaging Learners" by Katelyn McCormick of Bellmore, N.Y. and Shelby Tibbs of New Windsor, N.Y., with mentors Janine Bixler, professor of Education, and Rebecca R. Norman, associate professor of Education and Graduate Program Coordinator at the college; and "The Effects of Thyroxine on Arginase Gene Activity and Urea Excretion in Tree Frogs" by Sharifa Kelly of Monore, N.Y. with mentor Carl Hoegler, professor of Biology. 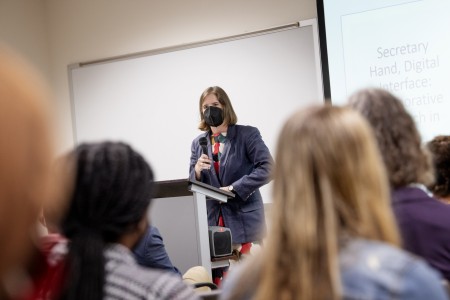 The event concluded with a keynote speech by Marissa Nicosia, associate professor of Renaissance Literature at Penn State Abington. Her presentation, "Secretary Hand, Digital Interface: Collaborative Research in 2021," focused on what students can learn by editing handwritten primary sources using a digital interface.