One step at a time: Mount alumna finds continued success after spinal injury

Like many professionals during the COVID-19 pandemic, Hanna Sheppard of Brookhaven, N.Y. wakes up each morning and goes to work virtually – in her case, as a Client Services associate for Morgan Stanley.
But Sheppard, a 2016 graduate of Mount Saint Mary College, took an extraordinary path to her seemingly ordinary life.
About 14 years ago, Sheppard dove into her pool from the middle, expecting to coast along the slanted floor to the deep end. Instead, she hit the concrete head-on and cracked her C5 vertebra in half. Were it not for her younger brother, she would have drowned.
When doctors saw the first x-rays, they were not very hopeful. For months, it seemed that Sheppard’s autonomy had been left in the depths.
But as her family, coworkers, and Mount friends can tell you, the accident was just a new beginning for the determined young woman. 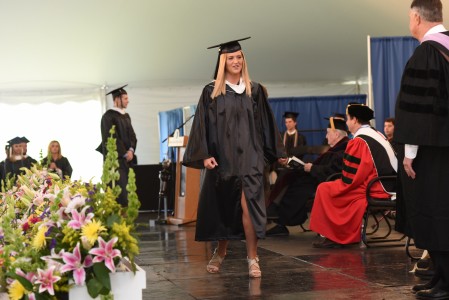 Much of Sheppard’s right hand and right leg remain partially paralyzed, but it’s become less of an obstacle and more of an inconvenience over the years. As a freshmen in 2012, she walked to class aided by crutches. As a senior in 2016, she walked across the commencement stage unaided. Today, she can be found working out at her local gym on her own.
While it’s certainly a big part of her life, Sheppard’s injury does not define who she is.
“My spinal cord injury doesn’t affect the big picture,” Sheppard noted. “It affects my everyday life – it’s hard to walk, it’s hard to do everything, but I still do it.” 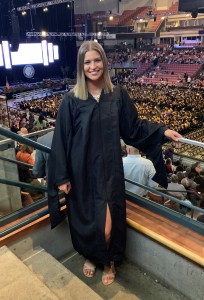 For example, at the Mount, Sheppard was Sophomore Class President. After graduating, she earned an MBA in Finance from Southern New Hampshire University in 2019. And recently, she had been advocating for spinal cord injury awareness, including serving as an ambassador for The Christopher and Dana Reeve Foundation.
About a year ago, Sheppard reconnected with Lawrence T. Force, a Psychology professor at the Mount and director of the college’s Center on Aging and Disability Policy. Force’s son, Patrick, suffered a spinal cord injury in 2019. In response, the Force Recovery Foundation was created to be present for individuals and family members on the spinal cord recovery path through the implementation of “Transformational Care” – that is, compassionate family support, knowledge-based advocacy, and innovative medical interventions. The foundation can be found online at www.theforcerecovery.com
“What’s incredible and what inspires me about Dr. Force is his perseverance for his son,” explained Sheppard. She added that once COVID-19 is no longer a threat, “I hope to help the Force Recovery Foundation achieve its goals.”
Force was one of many people at Mount Saint Mary College who Sheppard said helped to shape her into the successful professional she is today.
“I am so grateful and thankful that I went to the Mount,” she said. “It gave me my best friends and I still think about my professors. Every professor I had molded me in some positive way.”
She added, “That’s the reason I went to the Mount, too. I didn’t want to be a number in a class. And I made sure that I took advantage of that. Looking back, I wouldn’t change anything about college.”
Even after getting to know her injury over the years, sometimes there are still surprises, Sheppard said. Most recently, due to the COVID-19 pandemic, working from home has afforded Sheppard a respite from some of the issues she lives with on a daily basis.
But she quickly discovered that the situation was a double-edged sword.
“Since the pandemic, I definitely lost a lot of strength and went downhill quick,” Sheppard explained. “But since then, I got it back: every morning at 4 a.m. before work I’m at the gym, on the treadmill, doing weights – just trying to get better. Every day I have to make progress, otherwise I’ll regress.”
It took about four months to get back to the point where walking wasn’t extremely painful, she noted.
“It’s a learning experience; I didn’t know my spinal cord injury was like this,” Sheppard said. “This past year I learned a lot about myself and the regression rate.”
In January of 2021, Sheppard shared her story on the podcast Salt of the Earth, episode 20. She met Brian Walker, cofounder and cohost of the podcast, while they were both working out at her local gym. For more information about the podcast, visit www.livesote.com.
“Really, I wanted to be on the podcast to inspire people,” Sheppard said. “And if anyone hears my story and they know me or have helped me, I want them to know that I’m grateful.”
One part of that inspiration comes in the form of some simple advice: “Sometimes people are so, so quick to throw in the towel with anything that’s hard,” she said. “But never stop trying, never give up.”
That attitude, said Sheppard, has served her well.