The ones who stayed

It's no secret that the Mount is a home away from home for its students, and many a graduate has started the next chapter of their life with both excitement and a bit of sadness for leaving the campus they love. But some alumni enjoy the best of both worlds by returning as an employee.

It was John Chiaia's junior year when he had a revelation: As much as he loved his major of Public Relations and Media Studies, he didn't see himself pursuing that field for the rest of his life.

He took some time to reflect on next steps and realized that he was really invested in his work as a resident assistant on campus as well as his positions with the Student Government Association.

So when a resident director position at the college was posted soon after graduation, Chiaia knew he'd found his home, again.

"When the opportunity presented itself, I knew that I couldn't turn it down due to how much the Mount had looked out for me for four years," he explained. "I thought about how without the Mount I might not have ever figured out that I wanted to work in higher education, so returning to the place that was such a crucial part of that process felt right."

Since then, he's been paying it forward as a resident director and, more recently, coordinator of housing.

His experience as an alumnus in a student-centered position has proven beneficial to his ability to be a resource for his students, he said.

"Being a student here has helped me relate to their experiences academically and personally," Chiaia said. "Because I got to know the campus well as a student, I feel like I can better serve our current students by connecting them with resources or giving insight."

The transition from student to employee was fairly smooth for Chiaia, but he still has some trouble calling faculty by their first names: "It's been years of them trying to get me to call them by their actual name but I just can't," he said.

Chiaia has enjoyed aiding in improvements to his beloved alma mater, especially new ways to reach students. But most of all, he's happy to still be immersed in the community he's called home for more than eight years.

"Being a part of the Mount community means that you always have someone looking out for you," he said. "People here have become my family away from family. I enjoy being able to share my student experiences with our current students and to tell them about things that I wish I had known at 19. I appreciate that I get to use my MSMC experiences to help guide another student's MSMC experiences." 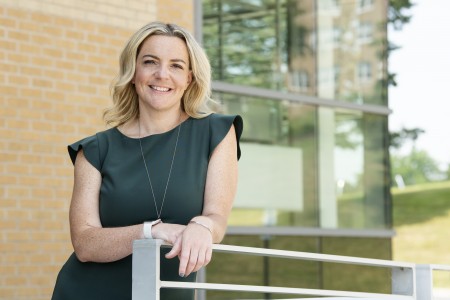 What started as a part-time opportunity to return to her alma mater has blossomed into a career spanning almost a decade for Megan Morrissey '10, assistant director of Student Success.

Upon graduating in 2010 with a degree in Public Relations and minors in Psychology and Theatre Arts, Morrissey thought she knew exactly where life was headed. She graduated with a master's degree in School Counseling in 2012 with plans to become a school counselor for middle or high school students.

Then Kathleen O'Keefe, former Career Center counselor and director, told her about a new opening at the college: a part-time academic coach position in the new Center for Student Success. It was a different path than she had planned, but the opportunity to rejoin the Mount community was too tempting to pass up.

Morrissey was an extremely active student on campus, which she believes assisted her in obtaining the position and continues to be an asset today. She was involved in the Different Stages acting troupe and student government, including being the vice president of the Student Government Association in her senior year.

She noted that the first day at a new job is always a bit stressful, but going back to a familiar environment made all the difference: "It was like being welcomed home again," Morrissey explained.

In her role as assistant director of Student Success, Morrissey helps hundreds of students each year succeed academically and socially at the college. But that isn't the only place where she's making an impact on the Mount: Morrissey is also club advisor for the Dance Team, a member of the First Year Experience (FYE) Taskforce, and more.

Having a background at the college helps her to connect with the students she works with, most of whom are freshmen. It's a feeling she can relate to, she said.

"I feel very lucky to be able to work with these students every day knowing that I have literally been in their place before," Morrissey explained. "I had a lot of the same professors, sat in the same classrooms, and had to go through similar hardships."

That sense of understanding is pivotal in her work, as it allows her to connect with the students as well as point them to resources they can utilize. This connection, in turn, has impacted her career.

"I feel like I can empathize with them on a different level and it has made me a better counselor and educator," she noted. "So really, the Mount never stopped teaching me."