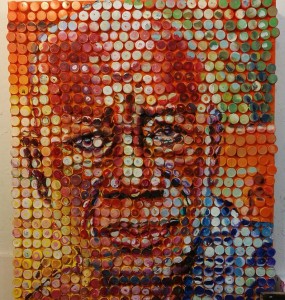 Ofori, a hybrid artist, was a guest speaker in Mount instructor Anna Adler’s “History of Art” course. Influenced by his early life in Africa, his American military background, and his desire to honor his family, Ofori’s art explores his personal, everyday experiences, immersed in both cultures. Ofori’s work challenges the Western ideal of beauty by working with inexpensive materials traditionally hidden or discarded, such as plywood and broom bristles. He combines African motifs, fabrics, and patterns with Western imagery and ideas in his furniture and multi-media paintings.

His art was also influenced by Nigerian artists Yinka Shonibare and Njideka Akunylia Crosby. Their work with textile and fabric is an expression of their culture, Ofori explained, something he was drawn to as an artist.

Ofori has long enjoyed painting images of people. “I’ve always been drawn to the human figure as the subject matter in my work,” he explained. “There’s so much you can…portray with a figure,” from a subtle gesture to a pose that speaks volumes.

Initially, Ofori’s early work focused mainly on traditional painting. “I wanted to portray my culture in painting,” he said, “but later on I figured, by just painting, it was losing something.”

That’s when he started experimenting with adding physical items to his paintings, such as fabrics, tassels, bottlecaps, wood, and other “found” materials. The results were a blend of two- and three-dimensional elements, and this “2.5D” approach became one of his signatures as an artist.

He also does sculpture work, and refers to these pieces as “interactive” art. “It’s not just to look at. You can move around it, pick it up. I usually involve the viewer in it,” Ofori explained. Some of these pieces are furniture, such as chairs, drawers, and tables.

Adler’s course is part of the Mount’s Communication, Art, and Digital Media program, which encompasses the study of journalism, video production, advertising, public relations, art, design, and film studies at the college. Housed in the Mount’s Division of Arts and Letters, the program prepares students for both traditional and emerging professions.