As part of Mount Saint Mary College’s Cybersecurity speaker series, Frank Casabianca from the National Security Agency (NSA), a visiting professor from the United States Military Academy at West Point, presented “A Cryptographic Tour of the Enigma” on November 3.

The NSA leads the government and military in cryptology, encompassing signal intelligence, cybersecurity, and computer network operations. As a former NSA director put it, “Our job is to make codes and break codes,” Casabianca noted.

Signals intelligence acts as the offensive side by breaking codes, including relevant foreign intelligence from cell phones, satellites, and more. The other side of the coin is making codes, as in Cybersecurity. The goal here is discovering what needs protection and how that protection can be initiated. Casabianca notes that in order to do all of these things successfully, one needs a wide skill set.

Casabianca also discussed cryptanalysis and its purposes in the Cybersecurity and Information Technology fields. Cryptology’s purpose is to encode a message going back and forth between two parties, helping to ensure confidentiality.

Some codes, or “ciphers,” are simple, he explained. One is the Caesar cipher, which is a type of substitution cipher in which each letter of a message is replaced by a letter at some fixed number of positions down the alphabet. For example, if every letter of the alphabet is shifted down three places, the plaintext word “hello” becomes “khoor” when encrypted. In order to decrypt this message, one now needs the “key” – in this case, the knowledge that the alphabet has been shifted by three.

“If we want to have a better key [and thus, more robust encryption], this is where the Enigma machine comes in,” said Casabianca. 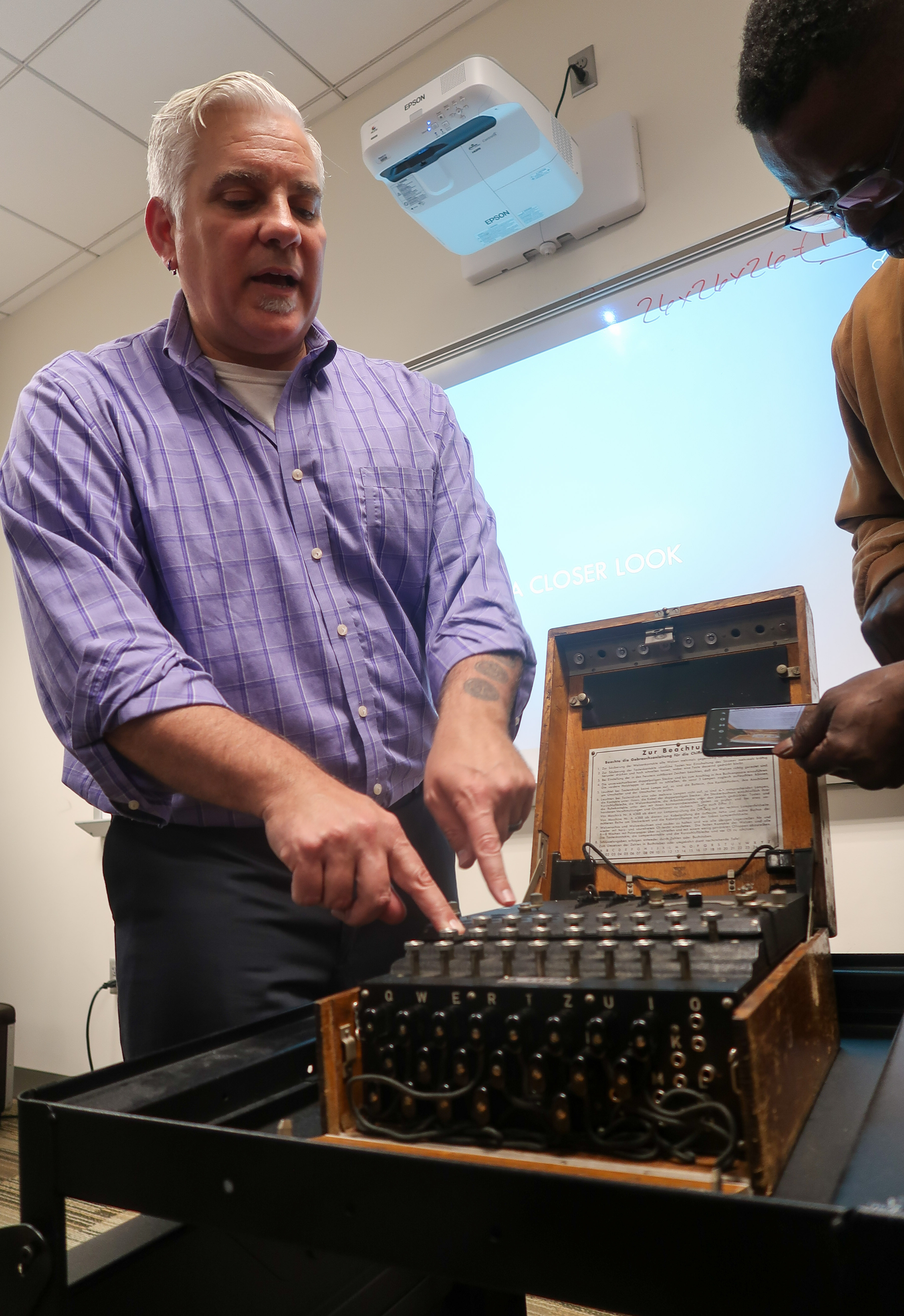 The Enigma machine was used extensively during World War II by the German military. Messages encoded with the machine were considered so well protected, it was used to send top secret information.

“The Enigma is electrical and mechanical with rotors inside that will change every time you press a key, and it actually changes the cipher alphabet you get every time,” Casabianca explained.

On the most basic level, the Enigma is a substitution cipher. But it changes the alphabet being used and virtually ensures one doesn’t get the same alphabet twice.

“It’s just a very complicated way of picking a new alphabet, that’s really all it is,” said Casabianca.

The Mount’s Center for Cybersecurity provides program guidance and oversight to the college’s Cybersecurity major and concentration; brings expert speakers to campus; provides cyber defense resources to the campus and the community; and more. The initiative is maintained by the college’s Division of Mathematics & Information Technology and supported by an external advisory board of local and national industry professionals, as well as faculty from the Mount and other institutions.