Kimberly Kelly of Wantagh, N.Y., who graduated from Mount Saint Mary College in May, is living proof that hard work and dedication to academics pays off: she was recently accepted into New York University's Master's in Publishing program.

"When I found out, it was quite literally a dream come true," said Kelly. "I've always wanted to live and work in the city since I was little."

Kelly, who was an English major with a concentration in Creative Writing at the Mount, will begin classes at NYU in the fall. She will be learning the ins and outs of the publishing industry though courses in design, business, and editing. Her goal is to have a career at a publishing house in New York City as an editor.

The NYU application process wasn't easy – Kelly had to submit writing samples, letters of recommendation from faculty, and more – but the work paid off and her application was accepted.

"Applying to grad schools was a daunting process," she explained. "Not having to worry anymore is very relieving."

Kelly has always loved the written word. For example, she worked at the Mount's Kaplan Family Library and Learning Center for all four years of her college experience. Thus, a career in publishing was a logical – and fulfilling – next step.

"I knew I loved books, and reading, and writing, so...publishing was the clear choice," she said. "Being able to be a part of the behind-the-scenes process and putting new books in people's hands and on store shelves is amazing."

And while the world is increasingly going digital, nothing quite beats the joy of holding a new book, Kelly noted: "Audiobooks and ebooks have become popular, but there's just a certain feel to holding a physical book in your hand, and putting it back on your shelf, that I really love." 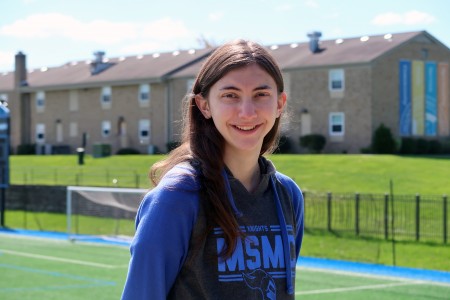 The Mount gave Kelly plenty of opportunities to sharpen her writing skills. For example, she wrote a short film called Put Together, which she helped to film through the college's Knight Productions. She has also written many articles for the college's online newspaper, Mount Messenger.

Of course, her classes and professors at the Mount played the largest role in Kelly's academic development, she said: "I like that the class sizes are small and your professors know who you are. I like the personal aspect that we have here."

Of Sulit, Kelly added, "She suggested taking classes she thought would be a better fit for me or that I would enjoy more, and she's been right every time."

For freshmen who might be starting as an English major at the Mount or interested in a career in publishing, Kelly's got some simple but important advice.

"Ask questions of your professors and advisors," she said. "For example, at first I didn't know we had a five-year publishing program with Pace."

"Take the more unique English electives we offer – they're a lot of fun...and they really open up the door to new types of literature, and different kinds of discussions in class," Kelly explained. "Those are really great."