The events were sponsored by the Mount's Catholic and Dominican Institute (CDI). Charles Zola, CDI director, assistant to the President for Mission Integration, and associate professor of Philosophy, facilitated the day's events.

Students enjoyed a desert reception and learned about the innumerable contributions St. Dominic made to Christianity more than 800 years go. It was the Dominican Sisters of Newburgh who, following in St. Dominic's footsteps, founded Mount Saint Mary College in 1959, with the Dominican Pillars of service, community, study, and spirituality as their guide. 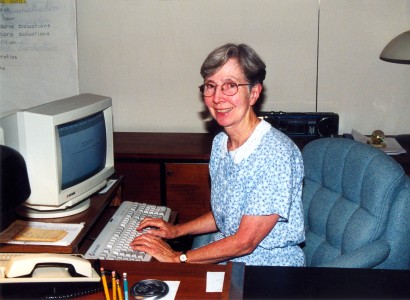 Later that evening, Mount faculty, staff, and about a dozen Dominican Sisters gathered on campus to celebrate the life of Sr. Agnes Boyle (left), OP, who served the college for nearly 50 years. She passed away in November of 2019.

At the reception, the Vice President for Academic Affairs Office was dedicated in honor of Sr. Boyle.

Sr. Boyle started her long career at the Mount in 1963 as an assistant professor of Education, chairing the division for nine years. She also served as president of Bishop Dunn Memorial School for five years, beginning in 1969. However, she was best known for her tenure as Vice President of Academic Advancement, a role she lovingly filled for three decades. Sr. Boyle also initiated the first master's degrees and the Adult Program at the Mount. Since 2017, high-achieving seniors in the Mount's degree completion program have been deemed Boyle Scholars.

Mount trustee and 1971 alumna Sr. Connie Koch, OP, offered an opening prayer for the ceremony. Sr. Catherine (Cass) McDonell, OP, prioress of the Dominican Sisters of Hope and 1969 Mount graduate, discussed the impact Sr. Boyle had on the Mount and her fellow sisters.

"Agnes gave our congregation the unreserved gift of herself," said Sr. Koch. "Through all of it, she lived an endless and joyful commitment...She will always be a part of us, and we are so much the better for that."

Sr. Catherine Walsh, OP, Mount professor emerita of Communications, praised Sr. Boyle for her dedication to her faith and to the continual betterment of the Mount.

"She prayed every endeavor into being," said Sr. Walsh. "After she left the college, when she was in need of medical care, she never stopped loving and praying for the college. When we would arrive for a visit, her first question was not 'how are you,' but 'how are things at the college?'" 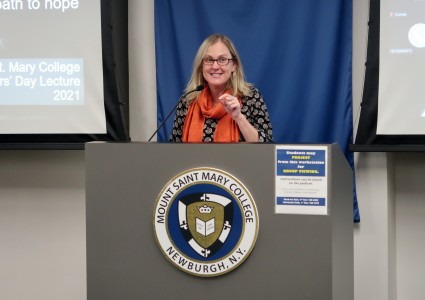 That night, CDI hosted the Founders Day Lecture, "Living Truth" by Ann Garrido (left). Garrido is an associate professor of Homiletics at Aquinas Institute of Theology in St. Louis, Mo. She is the author of several books, including the award-winning volumes Let's Talk About Truth and Redeeming Conflict.

Dominican Sisters have dedicated their lives to the pursuit of truth, and the Mount's motto is doce me veritatem, which translates from Latin as "teach me the truth." Garrido's talk focused on the meaning of truth and how we can find and embrace truth in our current society.

"It's my conviction that the Dominican [Order] – particularly Dominican schools – can have a particular role in reinstilling hope into these really seemingly unresolvable hot debates about truth," said Garrido. "This is because the Dominican Community comes with 800 years of talking about this topic...there's a good deal of acquired wisdom here."