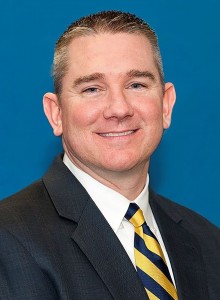 Brown, who brings more than 25 years of athletic administration experience as both an administrator and student-athlete with him, will begin his new post with the Knights on July 6, 2021.

He was hired as the Associate Athletic Director for External Affairs at Pace in 2015 and in that position oversaw the Setters' annual fundraising efforts, special events, sponsorships, community relations, and branding.

"I am thrilled and honored to be chosen as the next Director of Athletics at Mount Saint Mary College," said Brown. "I want to thank Mount President Dr. Jason Adsit, Vice President for Students Elaine O'Grady, the search committee, the athletics staff, and the student-athletes for their confidence in me and for this tremendous opportunity. From the start, I have felt that the family environment and the mission rooted in service and leadership at the Mount was something very special and it will be a privilege to be a part of it."

He continued, "Mount Saint Mary College has such a great history and tradition of athletics achievement in competition, in the classroom, and in the community, and in preparing students for life after college. I look forward to working together with our talented coaches and staff to continue to build on the rich experience for Knight student-athletes that Jessica Mushel, her team, and all who have come before have developed, and to serving the entire Mount Saint Mary College family."

During his tenure at Pace, Brown also oversaw the Communications staff and served as the sport supervisor for Baseball, Cross Country, and the Setters' spirit squads. In that capacity, he handled hiring of coaches and worked with each staff on goal setting, budgeting, and evaluations.

"I would also like to thank Pace University Director of Athletics Mark Brown, Associate Athletics Director Mike Winn, and the entire Pace staff for the incredible opportunities for growth that they have provided over the last several years. I am eternally grateful for all we have experienced together and for their support," stated Brown.

Prior to his return to Pleasantville in 2015, Brown served as the Vice President for External Affairs at the Eastern College Athletic Conference (ECAC) Office from 2013-15 and then as the Senior Vice President/Chief of Staff until June 2015 when he made his return to the staff at Pace.

Brown oversaw external relations activities of the ECAC, including marketing, corporate partnerships, branding, licensing and merchandising, awards, and special events. He served as a spokesperson for the ECAC, was the Tournament Manager for two NCAA DIII New England Baseball Regionals, and served in administrative roles at a number of conference and post-season championships at all levels during his tenure. He was the host marketing coordinator for the ECAC at the 2014 NCAA Division I Men's Frozen Four. Brown also added responsibilities for assisting with strategic planning, administrative, financial, and operational activities of the country's largest and only multi-divisional conference.

In his first stint at Pace, Brown served as the Director of Athletic Development for a year before moving to the ECAC Office. In his first post in Pleasantville, Brown directed activities related to the promotion and advancement of funding initiatives within the Department of Athletics. He was responsible for establishing sport-specific alumni networks to build support for the Pace Athletics Master Plan, including facility upgrades. Brown played an integral role in the success and growth of special events, including the Athletics Golf Classic and Athletics Hall of Fame, while enhancing the visibility of the Setters Club.

Brown also has administration experience at Mercy College, where he served as an Assistant/Associate Athletic Director and the Director of Alumni Relations, Fairleigh Dickinson (Teaneck) where he was the Director of Athletic Communications from 2001 to 2005, Fairfield University where he worked in the sports information office from 1995 to 2000, and Saint Peter's University as a graduate assistant in the sports information office.

Brown has experience nationally, serving on the NCAA Division II Women's Basketball, Baseball, and Men's Tennis East Region Advisory Committees during his career. He previously held a seat on the CoSida Olympic Sports Committee and has been a member of the National Association of Athletic Development Directors and the National Association of Collegiate Marketing Directors.

As a student-athlete, Brown excelled on the baseball diamond at Saint Peter's University earning MAAC South Division Co-Player of the Year honors in 1994, helping the Peacocks to their first ever league crown and an NCAA Play-in game appearance against West Virginia. Brown was an ABCA All-Region pick and was named CoSida Academic All-District in his senior year.

Following his days as a student-athlete, Brown had a stint with the Rookie League Lethbridge Mounties before returning to Saint Peter's as an assistant coach. He was on the staff with the Peacocks for the 1995 season before serving as an Assistant Coach at Fairfield (1997-2000) and Mercy (2006-09).

Brown graduated with a Bachelor's of Arts in Psychology from Saint Peter's in 1995, earned a Master of Science in Education from Mercy in 2011, and is currently a candidate for a Ph.D. in Sports Administration Leadership.

Brown and his wife Paula reside in Yorktown Heights and have two children: Katelyn and John.