Held at the Powelton Club in Newburgh, N.Y., the event honored the International Brotherhood of Electrical Workers (IBEW) Local 363 and the organization’s business manager, Sam Fratto.

Fratto was born and raised in Newburgh and is a proud Newburgh Free Academy graduate. In 2011, he became Business Manager of IBEW Local 363 and has since been elected by the membership four times.

Nearly 200 friends of the college came to support the Mount.

All donations and net proceeds will support the college’s Golf and Tennis Tournament Endowed Scholarship Fund. This scholarship is awarded to academically strong students with financial need, with preference given to students pursuing sports management, sports medicine, or similar fields. The first two recipients of the scholarship, which was established in 2021, are Collin Lambert of Washingtonville, N.Y. and Matthew Riccardi of Staten Island, N.Y. Both Lambert and Riccardi just finished their freshman year at the Mount.

In addition, the IBEW Local 363 established an annual scholarship at the Mount for students who are also members of IBEW Local 363 or a dependent of a member.

“This scholarship is a great way for IBEW Local 363 to support their members and families while also helping Mount students,” said Nikki Khurana-Baugh, vice president for Advancement at the college.

About Sam Fratto and IBEW Local 363 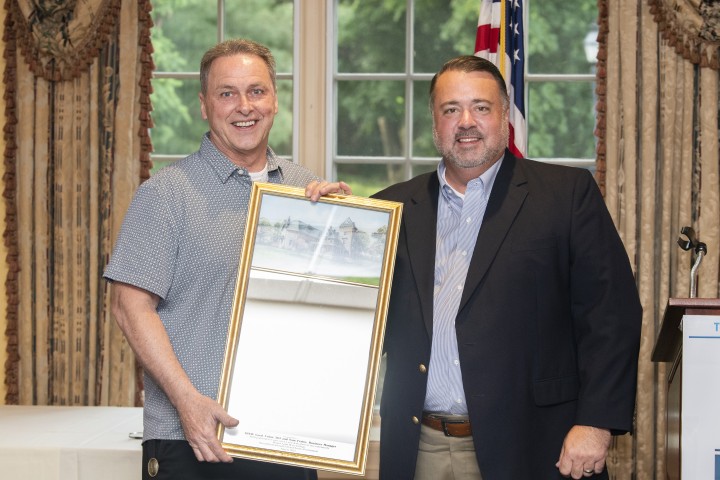 Sam Fratto began his career with the IBEW Local 631 in 1978 when he entered the electrical trade as an apprentice and began working for an IBEW Electrical contractor. In 1984, he became certified by the IBEW and NYS as a Journeyman Electrician. Fratto held various Foreman and Shop Steward positions for the next couple of years and was elected to the IBEW Local 631 Executive Board in 1986.

In 2011, Fratto became Business Manager of IBEW Local 363 and has since been elected by the membership four times (with second, third and fourth election without opposition.)

Fratto holds various other Labor Leadership positions such as Vice president of NYSBT, VP of NYS Electrical Workers, VP of Hudson Valley Building Trades Council, and Chairman of National IBEW Frontier Telephone Coordinating Council. Fratto has been recognized nationally within the IBEW many times for his work within his Local Union and the Hudson Valley area. He has been honored by organizations such as Rockland Business Association, Good Samaritan Hospital, Dominican College, Mount Saint Mary College, and the Hudson Valley Labor Federation.

Fratto and his wife, Andrea, have two adult children and are the proud grandparents of one granddaughter.