If the Mount Saint Mary College community could raise $24,000 in 24 hours for their Student Emergency Fund, college President Dr. Jason N. Adsit promised to shave his hair into a mohawk. 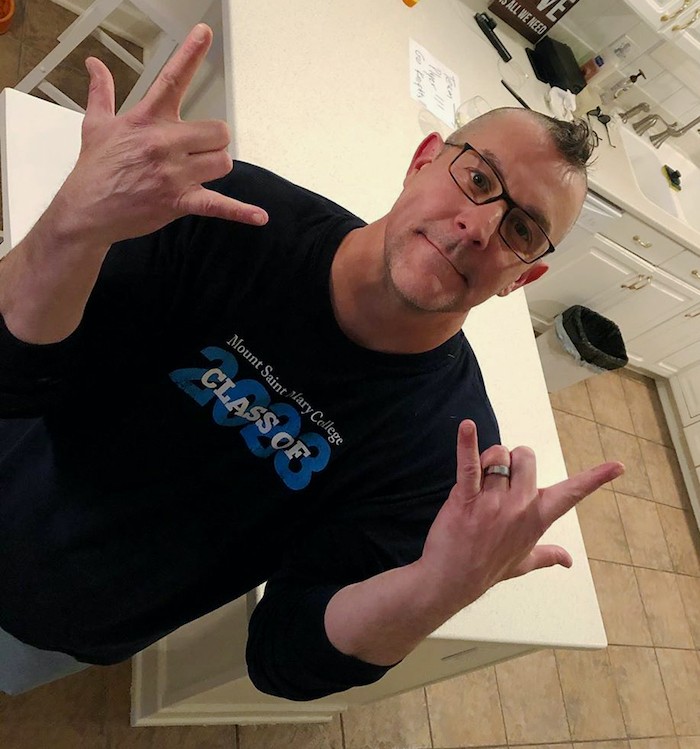 The Mount community banded together on Friday, April 3 and Saturday, April 4, raising more than $25,000 and shattering their goal by upwards of $1,000. True to his word, Dr. Adsit’s wife, Heather, give him his new punk rock-inspired hairdo half an hour later as hundreds watched live on Instagram.

But now there was a new problem, said Student Emergency Fund co-creators Nikki Khurana-Baugh, Vice President for Advancement, and Orin Strauchler, assistant dean of Student Support Services and director of Counseling: there was no money left for new applications.

“We were out of funds and we still had a lot of students whose needs we were not able to met,” said Khurana-Baugh. “And we didn’t have a lot of time.”

Enter Dr. Adsit, who offered to get a mohawk if the community could raise $24,000 in 24 hours. He was happy to do anything he could to help the students.

“People often don’t realize how many of our students live right on the edge of their finances, and that the smallest thing, like a flat tire on their car, or a missed utility payment, can throw their whole world into turmoil,” explained Dr. Adsit. “Sometimes just a little bit of help can do wonders, and this fund helps students weather rough times. When I first heard about the fund, I decided to go in a dunk tank on a chilly fall day to raise the initial set of funds, so getting the mohawk seemed like a nice extension of that effort.”

Strauchler said that he is always impressed with the generosity of those who donate to the fund, and he was overjoyed at the outpouring of support during the daylong challenge.

“I was amazed,” he said. “There are so many people struggling right now. People really thought about this and contributed sizable sums because they really care about our community.”

Among the donations were some from the Montefiore St. Luke’s Cornwall Hospital community. “They’ve got such great need, but they still were there to support us,” said Nikki Khurana-Baugh. “It made me feel really proud to be a part of the Mount community.”

As for Dr. Adsit, his new ‘do feels “clean and aerodynamic,” he explained. “My kids haven’t really adjusted, but they will eventually.”

However, the president revealed that his mohawk might not be as out of character as one might think.

“I was born and raised on punk rock,” noted Dr. Adsit. “After attending a lot of smaller hall shows as they were called then, in 1984 my sister Sue took me to see the Clash at a little venue where she went to college. Everything was cemented as soon as I saw the first person dive off the balcony.”

The Student Emergency Fund began as a joint venture between the Office of Advancement and the Mount’s Student Support Center. Support for the initiative quickly went campus-wide.

Khurana-Baugh noted that the Student Emergency Fund is rooted in the Dominican Heritage of the Mount, particularly the Dominican Pillars of service and community.

“Giving back is so important,” she said. “Emergency situations can dramatically impact a student’s ability for academic success. We are hoping to ensure that our students have all the opportunities and options to stay on track.”

The number of students who can benefit from the Student Emergency Fund is limited only by availability of funds. It’s easy to donate to the initiative: please visit msmc.edu/emergencyfund

To view the video of Dr. Adsit receiving a mohawk, visit msmc.edu/24in24